Introducing The New Man in my Life 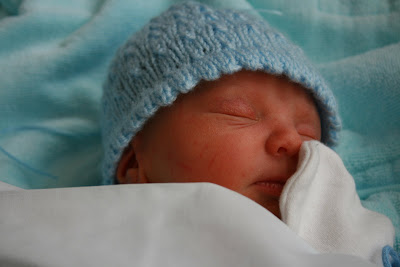 Meet Gabriel! He's got all the makings of a grumpy Frenchman and he's adorable and all mine (well, okay the Frog has something to do with him as well!). He was born on the 19th October at 00:31 and he truly blessed me by giving me a very easy labour - my waters broke at 18:30, I still had no contractions at 19:30 whilst being monitored at the clinic. Things then moved very fast and he sped his way out just a few hours later.
Despite the fact he was 3 and a half weeks early he weighed in at a healthy 7lbs/3,2kgs and 51 cms/20 inches. He even timed his arrival to coincide with my Mum's planned trip to keep me company in my last weeks of pregnancy - one way to make Grandma extra happy!

Things I have learnt:

I feel a bit naughty writing this post because I have so many people to contact and thank for their messages and gifts that have arrived in the last 3 weeks. But I also felt guilty for not updating the blog!

So, not sure when I'll post again - I hope to get into a bit more of a routine at some point but have yet to progress to multi-tasking!

I'm Ready For My Close Up 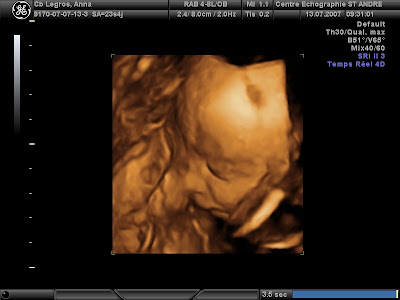 I know, it's been over a month and I've become a rubbish blogger again. I could list a litany of reasons that have kept me from my blog, ranging from the good (2 weeks holiday) to the slime (France Telecom).
I'm counting down the last three weeks of air travel to Hamburg before I'm grounded and am rather caught up in a lot of work that needs to be done before the end of the month.
The good news is that Frodo (pictured left on July 13th at the beginning of his 6th month) is doing very well. He kicks a lot and is well within the norms (which means he can't possible be related to Frog or myself). Meanwhile, I've recently been put on a sugar and fruit free diet as a precaution since my blood(y) sugar levels were slightly elevated and the kilos had been piling on. Luckily, the doctor's instructions came after my ice cream heavy holiday so it's just Frog and colleagues who have to put up with my sugar craving headaches now.
Anyway, back to the powerpoint writing. I'll be more active in a couple of weeks - I promise!
Posted by L'Oiseau at 3:50 pm No comments:

I can't say I miss drinking a huge amount. When Frog has been at various dégustations I have taken the odd surreptitious sip (you can't say no to trying Mumm's Blanc de Blancs) but that suffices as I move back to the fruit juice.

However, this weekend we went to a wedding in the countryside just outside Troyes in the Aube. It's only an hour and a half drive further south, and in the extreme of the Champagne Ardennes, but we felt the change in the temperature by a couple of degrees and felt like we were in another region.

The wedding was in a beautiful little church and was the most chaotic service I've ever experienced. After the sortie (which was never an official end to the service, more like get up when you're bored with what the priest is saying about the signing of the registers), everyone piled back to the bride's family house. And what a house. It was a huge old redbrick pile in the grounds of an old mill, complete with river, weir, 'beach' and magnificent garden. The garden and marquee were decked out for a '1001 Nights' style and we ate couscous, tagines, salads and sweet pastries.

So, to the booze. The champagne was served (the Aube is part of the Champagne AOC and known for its Pinot Noir) which was no great loss to me as I took the mint tea. Then we sat down for dinner and I spotted the magnum bottles of Pomerol 1975 on every table. Very unfair. I took a sip from Frog and even he (who's not a red fan) quaffed away happily all night.

I did, however, feel slightly virtuous the next day when Frog emerged having spent most of the night being ill after over indulgence in food and drink. Yes, I felt a little smug!
Posted by L'Oiseau at 2:19 pm No comments:

I was in Paris yesterday for some meetings. I had completely forgotten that it was the first day of the sales, so my 'quick dash' to Haussmann, to look for a jacket that fits, turned into a Parisian bargain hunter nightmare. There is no comparison to the craziness of Paris Sales.

So, empty handed, feet aching, I headed back to Gare de l'Est to get the train home (45 mins on the TGV, woo-hoo!). Whilst on the métro I remembered that between Gare du Nord and Gare de l'Est ( a 5 min cut through by foot) I had often passed an Indian Sweet shop. Never having had the time to stop before, this time I got off the métro early at Gare du Nord.

I went inside and selected several (alright, eight) different sweets to go into a box and a couple of vegetable samosas in a paper bag. The shop specialises in Pakistani/Indian sweets and whilst there wasn't the range of the Bangladeshi sweets I used to buy when I lived on Brick Lane in London, it was full of Indian/Pakistanis so I figured that had to be a good sign. What I tasted when I got home were wonderful. Juicy Gulab Jamans and Carrot Halwa, so sweet they make your teeth ache. The samosas were finished before I got on the train! A great new find. I wish they'd start supplying our dodgy Indian restaurants in Reims who, conversely, have the worst samosas I've ever experienced.

The last week has been a bit of a blur. Within the space of five nights, I'd stayed in three different hotels in different countries. All rather lovely hotels, so I'm not complaining there and we had a great weekend in Amsterdam for a surprise birthday party. Frog and I splashed out on a fancy shmancy hotel and lived the high life for a couple of nights.

Yesterday, this lovely lady came for the afternoon, so that was like another mini-holiday showing the sights. And then today I had to get back down to some work.

I had a little break later this afternoon for my five month check up at the doctors. Apart from the fact that my doctor has the limpest hand shake I've ever experienced, I really like her. She's gentle but a little 'business like' at times but I prefer that and to be honest needed it with the miscarriages last year.

So, this time, for the first time I headed off without Frog for my check up. "Did I tell you the sex last time?", she asked. "Yes, you said you were 90% sure that it was a girl". Frog had been a little disappointed as he was hoping for a little boy to play football with. However, he'd been on the phone to his best mate in Lyon who had a baby girl last year who raved about being the 'hero dad' to his little girl.

"Ahh, well I hope you haven't put the wallpaper up yet - because it's a boy. Definitely a boy."

I actually feel a little thrown by this! We had a lovely girl's name all picked out and I've been referring to "she" who kicks a lot at the moment. It's all the same to me in the end - I'm happy if it's healthy - but I don't know a thing about little boys. We were all girls in my family!! I know girls get sulky and tantrummy and are supposed to be harder. But I consider myself an expert on 'little madam' type behaviour!

So, it's now on with the thinking caps for a boys name that works in English and French. I'm going to have to spend the next day or so adjusting!
Posted by L'Oiseau at 9:20 pm No comments: 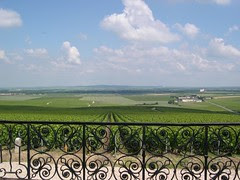 Rose Garden at Veuve Clicquot, Verzy
Originally uploaded by oiseau
I'm currently in Hamburg before flying off for a weekend away with Frog. We're treating ourselves to a fancy hotel in a European city - of which more next week.

I'd thought I'd just post a quick link to a few photos that I took a couple of weeks ago. Veuve Clicquot had an open weekend at their Manoir in Verzy. It's not their main house (which is situated in Reims) but in a village about fifteen minutes south of the city. I imagine LVMH (who own Veuve) use the house for corporate events and trainings.

However, they have a stunning rose garden in the grounds which was opened for the unwashed public for one weekend only. I just took a few photos and I'm not a great rose or gardening expert (unlike some who were there) but it was a pleasant afternoon out.

The set of photos can be seen here.
Posted by L'Oiseau at 8:56 am No comments:

We were expecting friends round for drinks last night. Frog called during the day to invite them over for an apéro before heading somewhere for dinner together.

Since Frog caught the husband on his own, he said he'd call back to confirm after he'd spoken to his wife but yes, he said, that sounded like a great plan.

So, 7:30pm still no call... we watched the clock and as my hunger level rose so did my impatience. I stomped a little in the kitchen and grilled a couple of chops to eat with some roasted veg that I'd cooked the night before.

By now it was 9pm and Frog and I found ourselves installed at the window that overlooks one of the city's main streets. We caught ourselves acting like an old couple as we people watched and passed judgement on those who passed below our flat. It was quickly decided that this kind of behaviour couldn't continue whilst we were still carefree (read baby free) and young(ish).

We quickly left the flat and headed to our favourite hotel bar, the only place in Reims where you can pretend that you're an international jet setter and sip cocktails.

Me: The waitress thought the champagne one was for me. She must just think I'm fat.
Frog: You've been in France too long. You're starting to sound like a French woman.
Me: You think French women have the monopoly on insecurities?
Frog: Well, English women don't care what they look like.
Me: You really want to continue this conversation?
Frog: Ummm... No..... So, what do you think would be best. Being a famous international sports star or musician?

And so the coconut and mango cocktail didn't leave me giddy but we ended up having a fun evening that didn't revolve around discussing work, babies or family. In fact I think date night might need to become a more regular occurance over the next few months.
Posted by L'Oiseau at 5:00 pm No comments:

L'Oiseau
Born in South West England I didn't even move house until the age of 18 years. Then chose to spend the next 18 years in India , Italy , London, New York, Paris and Reims. Now I'm back where I was born, in Poole. Speak several languages really, really badly. Met a Frog in France. Had two froglets. Our friends and family are far flung.